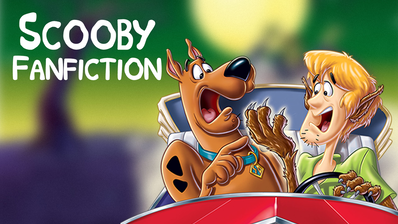 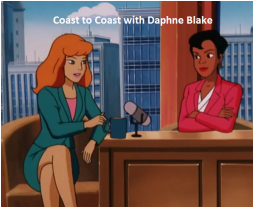 ﻿﻿Coast to Coast with Daphne Blake
by WildwindVampire
After losing her camera with evidence of real monsters on it, Daphne is more determined than ever to catch footage of real monsters for her now famous TV show, "Coast to Coast with Daphne Blake." Meanwhile, Velma tries to manage her horror book store when she isn't helping Daphne search for haunted attractions, and Shaggy and Scooby attempt to find a new job after they are fired for "eating all the contraband" at the airport. From creepy ghouls to blood sucking vampires, Daphne intends to capture it all on her video camera to help make her show more famous than ever!

Rating: Teen and up, due to some brief language 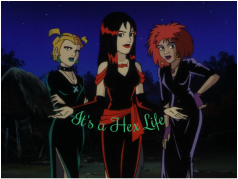 It's a Hex Life
by Grumpydrawer
This fanfic tells the story of how the Hex Girls first met, how they became a band, and gives more background on the Hex Girls before, during and after Scooby-Doo and the Witch's Ghost.
​​
Rating: Teen and up, due to some brief language and occasional sexual references
Read > 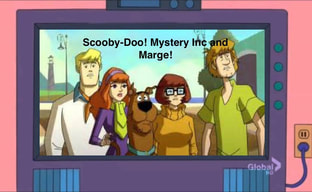 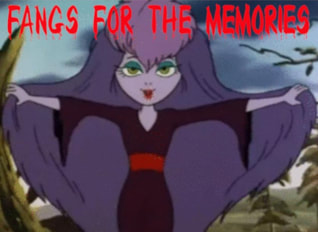 Fangs for the Memories
by WildwindVampire
It's been several years since Shaggy, Scooby and Scrappy left Grimwood's School for Girl Ghouls. Now teenagers, the girl ghouls have to cope with the remodeling of Grimwood's after the school had dealt with bad media publicity regarding the Revolta incident for years (as Sybella puts it, "Even monster parents didn't want to send their kids to a school where children were kidnapped by a homicidal witch!"). In addition to getting used to all the new faces, they also have to deal with the personal and social issues of adolescence, as well as the fact that they are growing up and only have a few years remaining at Grimwood's. Mainly Sybella-centric and from her POV, Sybella also begins to have her eyes opened to the fact there is a world outside Grimwood's, where she and the other ghouls have resided since they were kindergarten age. Meanwhile, an old enemy lurks in the shadows, seeking revenge on the girl ghouls.
​
Rating: Teen and up, due to some minor language and some references to puberty
Cover art credit: GroovyScooby 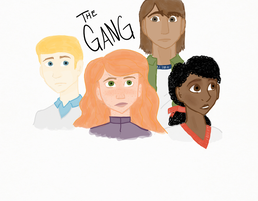 The Gang
by Bananagoose
Shaggy Rogers is a burnout high school student who is dating another social outcast named Daphne Blake. When someone close to Daphne is kidnapped, her and Shaggy (along with his dog, Scooby) have to combine forces with two other students, Fred and Vee to solve the mystery.

Rating: Teen and up, due to some minor language and mature themes
Read > 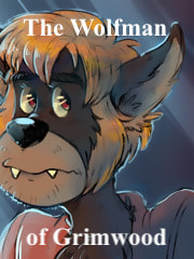 The Wolfman of Grimwood
by Mr. Spinner
Life is full of surprises. When a supernatural change hits Shaggy Rogers out of nowhere, there is only one place he and Scooby-Doo can turn to: Miss Grimwood's School for Ghouls. But even as they reunite with familiar friends, dark forces are at work in the world. Can Shaggy and his friends overcome the trials that await them? Ghoul School sequel w/ Reluctant Werewolf elements.

Rating: Teen and up, due to some brief language
Read > 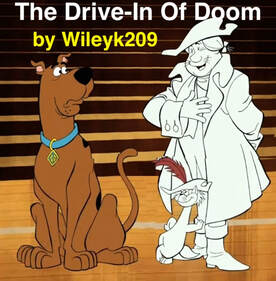 The Drive-In of Doom
by Wileyk209
Mystery Incorporated and the Funky Phantom gang team up to solve the mystery of a creepy reptilian beast, who is terrorizing a drive-in theater.
​
Rating: Appropriate for all audiences
Read > 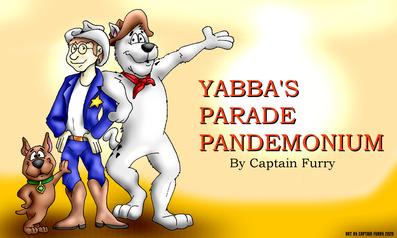 Yabba's Parade Pandemonium
by Captain Furry
Yabba-Doo, Scrappy and Deputy Dusty prepare for the visit of Scooby-Doo and Shaggy, but when criminals come to town, Yabba and the gang have to stop them before they wreak havoc on the town of Tumbleweed. This story also provides closure to the Scrappy-Doo years of the franchise. 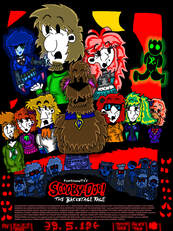 Scooby-Doo! The Backstage Rage
by Jordan Farrell
Scooby-Doo and the gang join forces with the Hex Girls to solve the mystery of the creepy Puppet Phantom, who turns all his victims into terrifying puppets in this fan stop-motion animation film.

Rating: PG-13 due to horror themes and some brief language
Watch film > 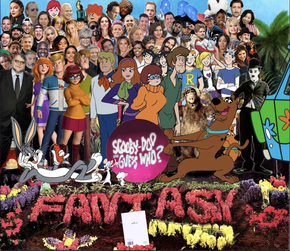 BradfordWritesScooby Fan Scripts
by Bradford N. Smith
In this fan adaption of Scooby-Doo and Guess Who?, the gang solves mysteries with various new guest stars and pop culture icons, including Billie Eilish, Sabrina Carpenter, Post Malone, Michelle Obama, and many more. In addition to this, Bradford has written several fan pitches detailing his ideas for original Scooby-Doo series that you can find at this same link below!
​
Rating: Appropriate for all audiences
Read > 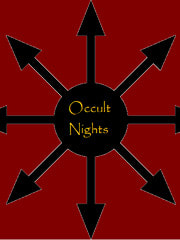 Occult Nights
​by The Wandering Piney
The world is full of magic. Or at least that's what Thorn thought after the defeat of Sarah Ravencroft. Despite years of searching, she hasn't seen any supernatural magic since Oakhaven. When a Hex Girls show is unexpectedly cancelled, an opportunity arises to explore a famous occult museum. Little does Thorn know that she's about to drag the band into a world of danger.

Rating: Teen and up, due to some brief language and substance reference
Also be sure to check out the sequel to "Occult Nights," titled "The Treasure of the Regal Hotel." You can read it on Fanfiction.net and AO3. Note that the sequel is rated mature due to intensely dark material. 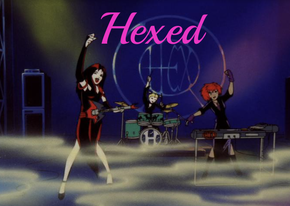 Hexed
by WildwindVampire
The Hex Girls are a local band in the small town of Oakhaven, Massachusetts. While Thorn, Dusk and Luna enjoy making music, the cheap venues they are forced to play in causes them to wish for more. After the girls are discovered by a music executive, they find out that rising to fame isn't quite how they envisioned it when they get tangled up in a dangerous mystery involving a cursed object.
​
Rating: Teen and up, due to some brief language 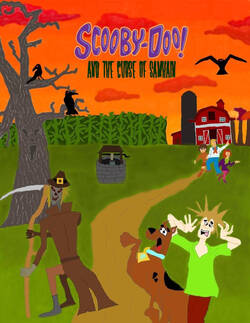 Scooby-Doo and the Samhain Mystery
by Chauliodus
​The gang travels to New England for Halloween after they are asked to solve a mystery at the most haunted farm in the United States. Upon their arrival, the gang becomes wrapped up in a creepy mystery involving dozens of monsters, and an ancient deity's return at a Gaelic festival.
​
Rating: Appropriate for all audiences
Read > 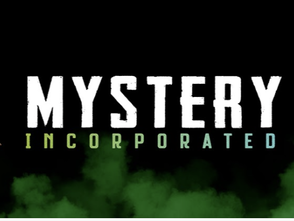 The journey begins as Fred Jones sets out to investigate the creature who murdered his parents. His search leads him into resident skeptic Velma Dinkley and the two must form a quick bond to fight back against the evil they have accidentally unleashed.
​
Rating: Teen and up, due to some brief language and mature content
Watch series > 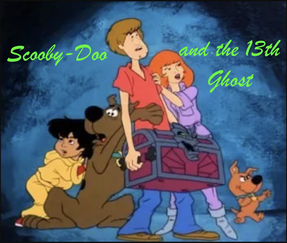 Scooby-Doo and the 13th Ghost
by WildwindVampire

Vincent Van Ghoul sends the gang on a mission to capture The Crimson Skull, the thirteenth ghost from the Demon Chest who has the power to zombify people with a single touch. Together, the gang must stop her before she can find the Beast's Jaw, a fabled jewel that allows the undead to open the Chest of Demons.
​
Rating: Appropriate for all audiences

It's Terror Time, Scooby-Doo!
by Bigscoobydoofan

Scooby Doo and his mystery solving friends go around the world, encountering frightful fiends and crucial clues in this fan adaptation of Be Cool, Scooby-Doo!. 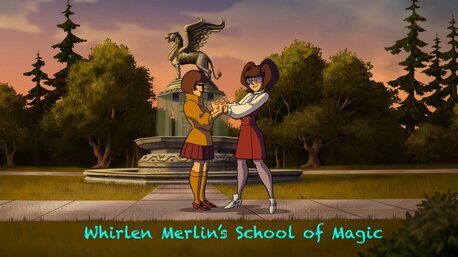 Velma is unexpectedly called to teach a magical literature course at her younger sister Madelyn’s school, Whirlen Merlin’s Academy of Magic. However, Velma has to put her mystery-solving skills into action without the rest of the gang when she discovers that the school is haunted by the ghost of an ancient, powerful wizard.
​
Rating: Appropriate for all audiences 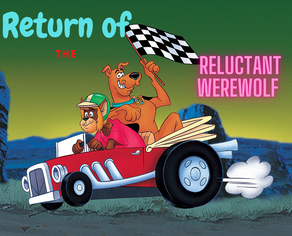 Return of the Reluctant Werewolf
by WildwindVampire

Written in the style of a “cinematic universe” connecting all of the Scooby-Doo shows and films from the 1980s, this story picks up where Reluctant Werewolf left off. Shaggy, Scooby, Scrappy and Googie have to escape Dracula when he follows them home. In their desperate quest to escape him, the four adventurers attempt to get help from some old friends.
​
Rating: Teen and up, due to some minor language