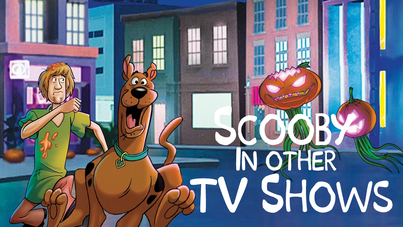 EVERYBODY HYDE
(from Dynomutt, Dog Wonder) 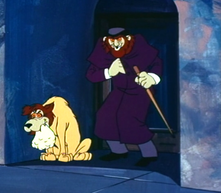 Trivia:
- Scooby-Doo! Mask of the Blue Falcon references this episode as one of the major plot points. 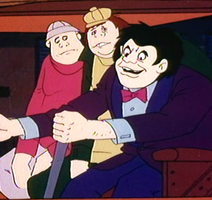 ​Original Air Date: Saturday, September 18, 1976
Villain: Lowbrow & Henchmen
Lowbrow, a lowly caveman, attempts to become a genius by stealing everything, so Blue Falcon, Dynomutt, and the gang team up once again to stop him.

THE WIZARD OF OOZE
(from Dynomutt, Dog Wonder) 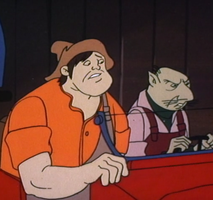 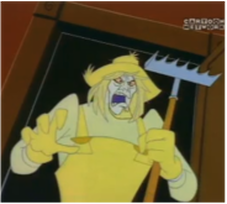 Original Air Date: July 21, 1997
Villain: The Ghostly Gardener
Scooby and the gang pick up a hitchhiking Johnny Bravo, who wants help finding his Aunt Jebidissah. The Mystery Machine goes over to Johnny's Aunt's mansion, who appears to have been kidnapped by a ghostly gardener.
​
Trivia:
- One of the culprit's disguises was Joseph Barbera. 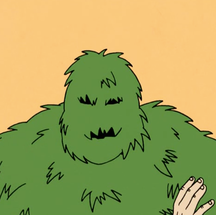 Original Air Date: July 7, 2002
Villain: Grass Monster
Shaggy and Scooby are arrested due to disorderly conduct in front of a policeman in the Mystery Machine. The rest of the gang hire Harvey Birdman, Attorney at Law to help them clear Shaggy and Scooby's name.

Trivia:
- The Ghost Clown, Charlie the Robot and Redbeard's ghost appear in jail with Shaggy and Scooby.

BAT MITE PRESENTS: BATMAN'S STRANGEST CASES
(from Batman: The Brave and the Bold) 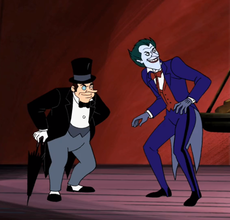 Original Air Date: April 1, 2011
Villain: Joker / Penguin
When Weird Al Yankovic is kidnapped by Joker and Penguin, Scooby and the gang join forces with Batman to stop them and find Weird Al.

Trivia:
- The Hooded Person and Joker and Penguin's Dryad and Troll disguises are reused in this episode. 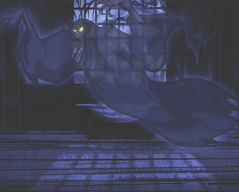 Original Air Date: Tuesday, March 20, 2018 (Premiere at PaleyFest LA)
​Thursday, March 29, 2018 (Official Premiere on the CW)
Villain: Green Ghost
Sam, Dean and Castiel are sucked into a haunted television set, and become stuck in a cartoon. But it's not just any cartoon - it's Dean's favorite cartoon series, Scooby-Doo! After meeting the gang in a malt shop, Sam and Dean follow the gang to a haunted house where Scooby has received an inheritance from the late Colonel Sanders. In a reimagining of the classic Scooby-Doo episode "A Night of Fright is No Delight," the Scooby gang tries to solve the mystery of the green ghost haunting the mansion. Sam and Dean quickly discover that the episode doesn't play out as they remembered when the ghost kills one of the cousins and the lawyer. Sam, Dean and Castiel try to solve the mystery whilst trying to keep the gang's innocence.

Trivia:
- Hot Topic sold Scoobynatural clothing and merchandise to promote the crossover.
- Scrappy-Doo makes a brief cameo appearance in the classic door scene.
MONSTER PARTY
(from OK K.O.: Let's Be Heroes!)
Original Air Date: Monday, October 1, 2018 (On-Demand / Cartoon Network Website Premiere)
Sunday, October 21, 2018 (Cartoon Network TV Premiere)
Villain: N/A
Enid's friends from Grimwood's School for Girl Ghouls (Sibella, Winnie, Elsa, Phantasma and Tanis) pay her an unexpected visit. Tension soon arises due to a years-old lie which Enid has perpetuated about being a witch, when she is actually a ninja. Enid must find a way to come to terms with her lie without ruining her friendship with her fangtasticly frightening friends.

Trivia:
​- While this episode does not feature Scooby or the gang, it is the very first appearance of the girl ghouls since Scooby-Doo and the Ghoul School ​30 years prior.
CARTOON FEUD
(from Teen Titans Go!) 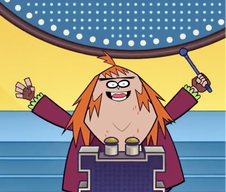