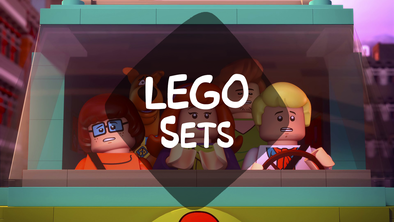 On August 1, 2015, the LEGO company began a line of Scooby-Doo LEGO products with five sets, Mystery Mansion, The Mystery Machine, Mummy Museum Mystery, Mystery Plane Adventures and Haunted Lighthouse, all of which included classic Scooby-Doo villains. Since then, the LEGO company has created 16 different shorts in stop-motion LEGO animation, with all of the gang being portrayed by their normal voice actors (with the exception of Velma, who was replaced by Kate Micucci), along with a 22-minute special, LEGO Scooby-Doo: Knight Time Terror, and a 75-minute movie, LEGO Scooby-Doo: Haunted Hollywood. In 2017, a sequel to Haunted Hollywood, LEGO Scooby-Doo! Blowout Beach Bash, was released. In addition, LEGO Dimensions, released on September 27, 2015, includes Scooby in the game. 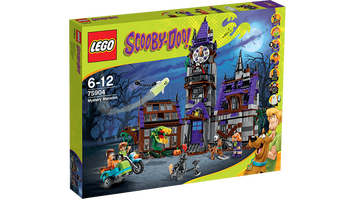 Speed to the Mystery Mansion on the motorbike with Shaggy and Velma to help Daphne and Scooby-Doo find the stolen treasure! Creep quietly into the spooky building and watch out for the Ghost and Black Knight lurking in the corridors. Evade the man-eating plant in the conservatory and dodge the morning star pendulum trap. Quickly make a giant hamburger in the kitchen then look for clues. Locate the secret compartment containing the golden key, then open the safe containing the stolen gold bars. But hurry – you must find the hidden loot before the clock strikes midnight and the Vampire emerges from behind the spinning wall! Includes 6 minifigures with assorted weapon and accessory elements: Shaggy, Velma, Daphne, Vampire/Bob Oakley, Ghost/Bluestone the Great, Black Knight/Mr. Wickles, plus Scooby-Doo (standing version). 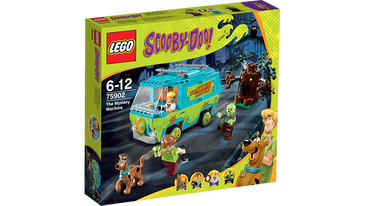 Escape from the spooky forest with Scooby-Doo, Fred and Shaggy! Avoid getting trapped in the branches of the spooky tree and jump into The Mystery Machine to get away. Read the clue and open up the back of the vehicle to use the computer screens, spy glass and other mystery-solving equipment. Work out the real identity of the Zombie who is secretly operating the tree… then celebrate with a giant sandwich! Includes 3 minifigures: Fred, Shaggy and Zombie/Zeke, plus Scooby-Doo (standing version). 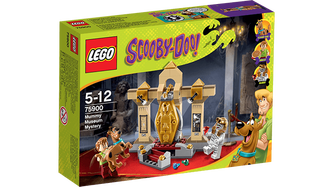 Enter the spooky museum with Shaggy and Scooby-Doo and solve the mystery of the missing gems! Jeepers, it’s a creepy place – our heroes are spooked… and hungry, as usual. But hang on! Are they seeing things or is that a hamburger hanging from the ceiling? Reach for the burger to accidentally open the golden sarcophagus or take off the mummy’s headdress to reveal the mastermind behind the robbery. Then open the secret door in the stairs to reveal the hidden treasure! Includes 2 minifigures: Shaggy and Mummy/Dr. Najib with an accessory element, plus Scooby-Doo (standing version). 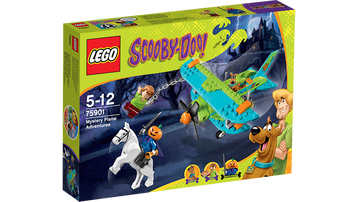 Chase the Headless Horseman with Shaggy and Scooby-Doo and reclaim the stolen golden cup! Search for clues and take off in the plane… but does Shaggy even know how to fly a plane? Too late to worry about that now! Leave Scooby sitting in the cockpit and swing down on the chain with Shaggy to try and grab the precious cup. Fire the hamburger flick missiles to knock the Headless Horseman off his horse. Then rip off the pumpkin-head disguise to reveal the villain’s true identity! Includes 2 minifigures with a weapon and assorted accessory elements: Shaggy, Headless Horseman/Elwood Crane, plus Scooby-Doo (sitting version). 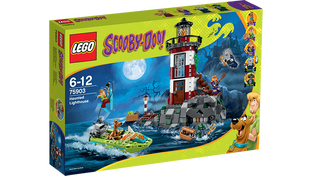 Investigate the creepy Haunted Lighthouse with Scooby-Doo and the Gang! Steer the boat with Daphne and Scooby, while Shaggy rides the water skis. Dock at the foot of the rocks, by the light pole. Move the planks with the crowbar and reveal the map with the clue to find the golden key. But beware! The Lighthouse Keeper and Sea Demon have been hiding in the skull cave and are ready to ambush meddling kids. Battle past them, avoiding capture in the prison. When you reach the top of the lighthouse, open the secret compartment holding the golden key. Then seek out the hidden treasure chest under the lighthouse and reveal the villains’ true identities! Includes 4 minifigures with a weapon and an accessory element: Shaggy, Daphne, Lighthouse Keeper/Verona Dempsey and Sea Demon, plus Scooby-Doo (sitting version). 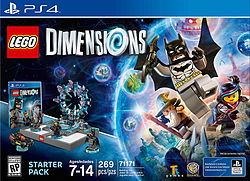 LEGO Dimensions is a multi-cartoon crossover game in LEGO form. Series included in the game are Scooby-Doo, Doctor Who, The Simpsons, LEGO Ninjago and Chima. Besides just cartoons, the game will also feature various famous movies from pop culture, including The Wizard of Oz, Back to the Future, Ghostbusters, LEGO Movie, Lord of the Rings, and Jurassic World. The game will also include DC Comics, Portal 2, and Midway Arcade.


A Scooby-Doo team pack can also be bought along with the game, which includes Shaggy, Scooby, the Mystery Machine and Scooby Snacks. The game was released September 27, 2015, and is available on Wii U, Xbox 360, Xbox One, Playstation 3 and Playstation 4.

Watch the trailer here:
LEGO Shorts
On July 30, 2015, LEGO began uploading shorts to their YouTube page portraying the Scooby characters in LEGO animation to promote the new Scooby-Doo LEGO product line. 16 shorts in total were uploaded between July 30, 2015 and April 26, 2016.

TAG SALE CLUE
﻿Original Air Date:﻿ ﻿Thursday, July 30, 2015
﻿Scooby and the gang go to the tag sale, where the gang finds a clue about a recent mystery...and Scooby finds the neighbor's BBQ.
Note: Scooby is the only member of the gang to speak in this short.﻿


﻿GHOUL ON WHEELS
Original Air Date: Wednesday, August 26, 2015
﻿Villain: The Creepy Keeper
The gang must bike away from the Creepy Keeper, who is trying to catch the gang.
Note: From this short on, Kate Micucci replaces Mindy Cohn as Velma.

THE GETAWAY
Original Air Date: Wednesday, September 2, 2015
Villain: Mummy
The gang attempts to get away from a mummy by hiding in the Mystery Machine.

CREAKY CREEP OUT
Original Air Date: Wednesday, September 9, 2015
Villain: Zombie / Monster Tree
Scooby and Shaggy hide from a horde of zombies in the woods...but is that really a safe hiding place?

IMPOSSIBLE IMPOSTERS
Original Air Date: Tuesday, September 15, 2015
Villain: Vampire
The gang unmasks the vampire and are shocked to learn the culprit is Velma...or is it?

TRICK & TREAT
Original Air Date: Wednesday, October 21, 2015
Villain: Vampire
Scooby and Shaggy go trick-or-treating at a vampire's residence to try to lure him out of the house, but they find getting treats is much more enjoyable.

IF YOU BUILD IT, PIZZA WILL COME
Original Air Date: Tuesday, April 5, 2016
Shaggy and Scooby build a device that can give them unlimited pizzas.

MUMMY MUSEUM MYSTERY
Original Air Date: Tuesday, April 12, 2016
Villain: Mummy
Shaggy and Scooby are stuck on a moving device while running away from a mummy.

DANGER PRONE DAPHNE
Original Air Date: Tuesday, April 19, 2016
Villain: Sea Demon
Daphne finds what she thinks is the perfect hiding place from the sea demon, but the gang is skeptical.
​
WICKED WAREHOUSE PURSUIT
Original Air Date: Tuesday, April 26, 2016
Villain: Black Knight
​Shaggy and Scooby use the power of confusion to trick the Black Knight so they can escape an abandoned warehouse.