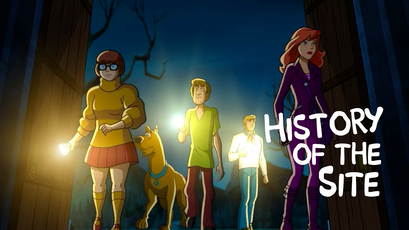 Welcome to ScoobySnax.com and thanks for taking the time to read this page!

I've been asked by several people now how I decided to create this site, so I thought I'd create this page. The idea for ScoobySnax.com really springboarded from me wanting to help both long-time and new fans find news and information related to Scooby-Doo, using my own unique take and expertise on each of the episodes, movies, and other forms of the franchise. The basic construction for the site began in June 2014, where I began putting together some of the episode and movie guides as well as some other resources like the How to Have a Complete Scooby-Doo Collection guide and the Episode Releases Database.

Construction for the site continued throughout Summer 2014, until September 3, 2014 when the site officially went live. The site was nowhere near finished, but it was more than presentable at the time and I wanted to share the modest amount of information that I had with people. In October, I began really focusing on how to improve the blog, and on October 13, 2014, I began a weekly blog series entitled Fun Fact of the Week. Each week, I highlighted a different lesser-known fun fact about the franchise and casually posted one each week on whatever day was most convenient (which at that time, was mostly Wednesdays). I wasn't sure if Fun Fact of the Week would just be a one-off idea or something that would take off, though at the time I had no idea just how much the idea would take off. As the Fun Facts became more popular and I began getting compliments on them, I decided to stick to a consistent day which was Monday (for no apparent reason other than people hate Mondays, and I wanted to try to give people a reason to look forward to them!). On the first Monday of 2015 (January 5), the Fun Facts officially switched over to Mondays. Now, the Fun Fact of the Week blog series has become huge on the site and still happens every Monday!

​In 2015, I really began making a larger effort to update the site and began adding villain pics to each of the guides and creating the Episode Releases Database. Throughout the early months of 2015, I experimented with various things on the blog such as the short-lived "Thoughts and Things" blog series (which ended after 12 weeks on Friday, March 27, 2015).

After making several other pages and minor updates to the site in 2015, 2016 saw the finishing of the long-awaited Episode Guides. It was a monumental project, as I wrote every single bit of information by hand and took screenshots of every single villain in the Scooby universe myself. On October 17, 2016, the episode guides were finally completed and posted on the site, leaving only a few updates from my original planning of the site way back in June 2014.

2017 was the year for ScoobySnax.com. On the week of January 23, I began putting the finishing touches on the Internet Games page (now archived due to Flash becoming obsolete) and it was published live on January 25. Next up was the Character Guide, which amusingly I had been working on all the way back to March of 2015. That next week on February 1, what one person called the 'elusive' Character Guide was finally added to the site. That only left two pages, one of which was the List of Releases page that listed every Scooby-Doo DVD, Blu-Ray and VHS. The full List of Releases went unofficially live on the site on May 14, 2017 but was not officially complete until May 25. That same day, the Crystal Cove Online page (which is essentially just an extension of the Internet Games page - both now archived) went live. That completed all the original updates I had planned when I first envisioned what I wanted on the site in 2014, after three years of hard work on building various areas of the site.

On December 30, 2019, the Comics page was added to the site, which has information on all Scooby-Doo comic series, as well as issue titles and release dates.

Of course, it is impossible for one to list every single thing available related to Scooby-Doo in the world, as to do so would take more than a lifetime. As new content is released and new ideas for pages arise, I will continue to update the site with more info. Though it was very time-consuming, I really enjoyed creating all these pages and still enjoy chatting with both new and long-time Scooby fans!

Where do you get your information from?
All my information either comes from official sources or from my expertise with the fandom. Nothing on the site has been copied or plagiarized from any other site. My philosophy is that I want to give people information from my own perspective/viewpoint and experience on the franchise, not someone else's. In brief, unless I have otherwise noted it, all the information you see is not recycled from any other site (very occasionally, I will use information/images from official sources or DVD back covers strictly to maintain accuracy, though I will always note if I do so).

Are you in competition with other Scooby sites?
I feel all the Scooby sites are here for a similar purpose, to give people info and to create a fun, stimulating environment to discuss Scooby! I am not at all in competition with any other site and highly respect anyone who takes the time to make their own, unique place to discuss our favorite cartoon canine. I don't see any reason why all Scooby fan content creators can't all work together to help foster a welcoming and friendly atmosphere for the Scooby fandom!
​
Who's the person behind creating this website?
Hi! I go by the username WildwindVampire, and I've been an avid Scooby fan since childhood. I joined the online Scooby fandom in 2008, which originally just started with me making a few posts on the ScoobyAddicts forum here and there. In 2011, I became an admin on the forum, which I still continue to be to this day (under my original username, Doo), and decided to create my own Scooby site as a resource in 2014. My favorite Scooby eras include the 80s films, particularly Boo Brothers and Reluctant Werewolf, as well as anything in the Zombie Island era. However, I still have a huge soft spot for the classic Where Are You show that started it all! I also dabble a bit in writing fanfiction, and have so far written two Scooby-Doo stories, one revolving around Daphne's show in Scooby-Doo on Zombie Island, and the other being a Sybella-centric fanfic based on the movie Scooby-Doo and the Ghoul School featuring the girl ghouls attending high school at Grimwood's. Besides Scooby, I'm a big Whovian, I love The Simpsons, and also enjoy a lot of other Hanna-Barbera cartoons, including The Flintstones, The Jetsons, and many of the Scooby clones. I also love being outdoors, reading and I'm very into music. I also have the hobby of retaining more useless information than any one person should, as demonstrated by the blog series on this site in which I post a random Scooby-Doo fact every Monday.

I love getting to talk to new and old Scooby fans on the blog and in the fandom! You all are so sweet and always have such interesting perspectives to share. This site continues to be one of my favorite things, and I hope it is a helpful resource for all Scooby fans!