Note: This page has been archived for informational purposes, given Adobe Flash became obsolete in 2020. The games on this page are no longer playable as they were made entirely with Flash Animation.
SCOOBY TRAP 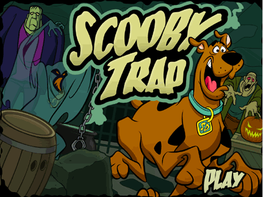 Glitches: There are a few glitches in this game.
1. If you stop at the very edge of the wagon stoppers in a wagon (in any level), you can start the wagon again and it will go past the stopper. In addition, if you hold down the right arrow key at the end of a level (when you find the gang), while the next stage is loading, you can still move in your wagon (if you are in one) in the background.
2. In Level 8, at the end of the level, if you don't jump on the crate to jump over the final hole, you will disappear and be unable to do anything (the game will keep going even though you have disappeared, the only way to fix this error is refreshing the page, thus losing your progress in the game). In addition, the same thing will happen if you don't jump on the crate at the end of level 9, except for in this level, if you hold down the right arrow key, you will reappear in a few seconds.
CREEPY CASTLE 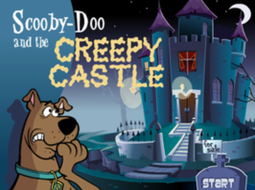 The Ghost King is trying to scare Scooby! Look for objects or other ways to trap the ghost around the castle rooms before he scares Scooby stiff! If you are scared by the ghost four times in one level, you lose the game. However, you can find boxes of Scooby Snacks around the castle to lower your fear level. Also, you must rescue Velma, Daphne and Fred, who the ghost king has captured. In Level 1, you must rescue Daphne, Velma in Level 2 and finally Fred in Level 3.
CASTLE HASSLE 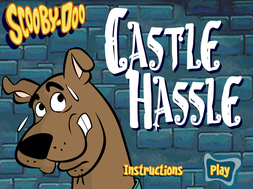 Ruh-roh! Scooby and Shaggy are trying to help the gang while fending off a mischievous ghost! Drop anvils on the ghost to keep him from scaring you silly!
1,000 GRAVEYARD DASH 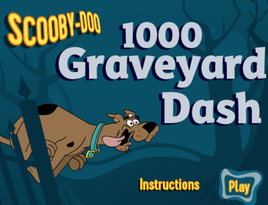 Scooby is alone in a spooky graveyard with a ghost chasing him! Try to run as fast as you can through the graveyard to avoid the ghost's icy grasp. Avoid other obstacles, like ghouls and trees along the way!
SCOOBY-DOO'S FROZEN FRIGHTS 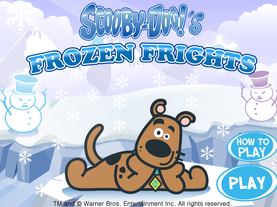 Scooby has to find his pal Shaggy! Jump and duck to avoid the obstacles to find your green-shirted chum before the ghosts capture you!
SCOOBY-DOO LOVE QUEST 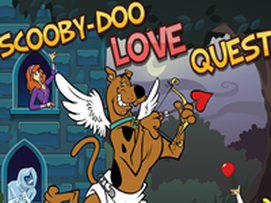 Catch the hearts that Daphne and Velma are throwing to stop the ghost from getting you!
SCOOBY'S SEARCH 'N SCARE 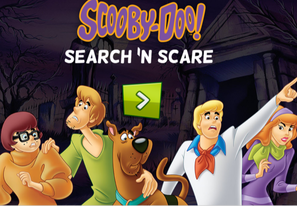 Look for the hidden items in the spooky backgrounds before time runs out!
LOST HIS TRACK 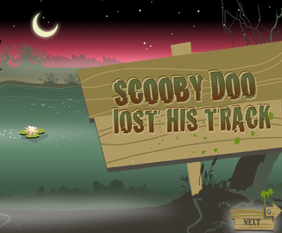 Scooby-Doo has been separated from the gang! You must lead him across the spooky swamp waters to find his friends. But beware, if you fall in the water, you will lose a life!
A-MAZE-ING ESCAPE 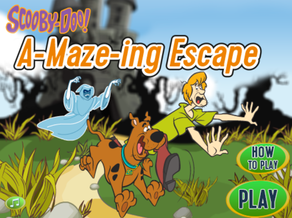 Help Scooby and Shaggy escape from the castle by creating a maze. Manipulate each path to try to complete the level and get Shaggy and Scooby through safely!
GHOULY GROOVES 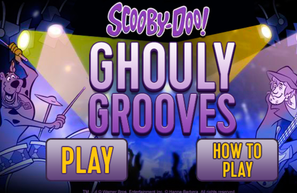 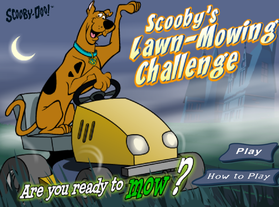 Help Scooby mow the correct patterns in the grass. Make sure you're mowing exactly correct, if you're too far off, you'll lose the game!
BUBBLE BANQUET 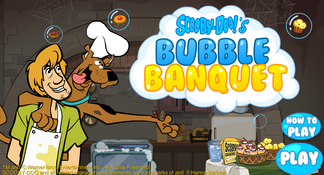 Shaggy and Scooby's dishwasher has gone crazy! Help them get the snacks in the soap bubbles back by having Scooby jump for the snacks. But don't let the ghost get them before you!
HAUNTED CASTLE POP AND STOP 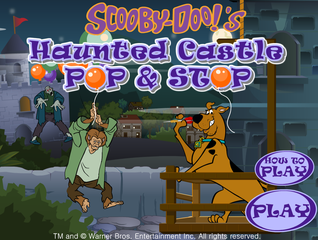 Using your mouse, help Scooby-Doo pop the balloons that the monsters are landing with. Don't miss too many though, or you will lose the game!
MONSTER SANDWICH & SANDWICH STACK
Try to make a huge sandwich without it toppling over! There are several challenging levels to keep you hooked! There are two different versions of the game which are essentially the same, one being in traditional animation and the other being in Be Cool, Scooby-Doo! animation.
ROLLER GHOSTER RIDE 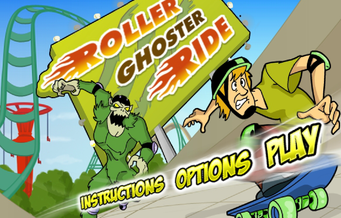 Shaggy is being chased by the creepy Roller Ghoster! Using your skateboard, you must help Shaggy become fast enough to get away and do various tricks along the way.
DOWNHILL DASH 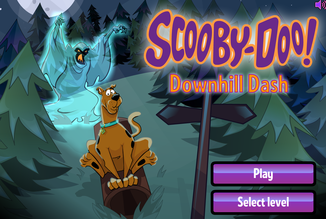 Follow the trail of food and try to get down the hill before the ghost gets you!
DOWNHILL DASH 2 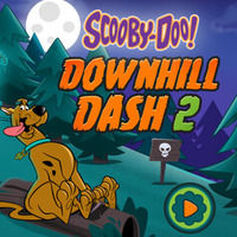 Collect the snacks and avoid obstacles getting down the hill, so the ghost doesn't catch you!
PACK A SNACK 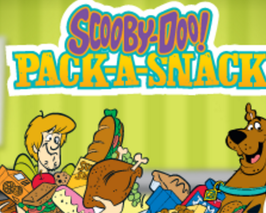 Grab the food Shaggy is throwing to you, but avoid the falling dishes! Try to collect as many snacks as you can before time runs out!
KICKIN' IT! 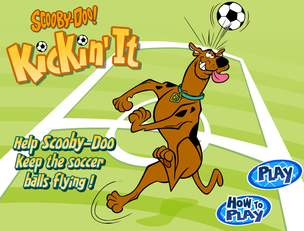 Keep the soccer balls bouncing on Scooby-Doo's head for as long as you can!
BE COOL SCOOBY-DOO: NO GUTS, NO TREATS 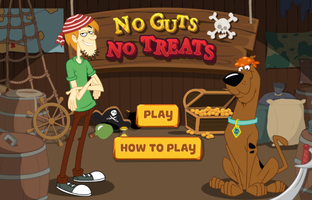 Try to hide from Captain Skunkbeard in the barrels, but don't hide too long, or you'll lose your courage! Put your motor skills to the test and see how fast you can hide from the pirate!
BE COOL SCOOBY-DOO: IT'S DARK OUT THERE 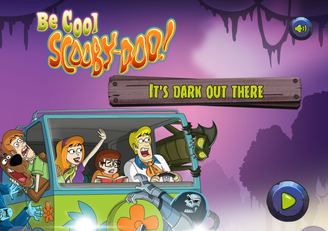 Click on as many monster eyes as you can to keep them from capturing the gang! As the game progresses, the eyes get faster, so this is a great test of mental speed.
OVERBOARD 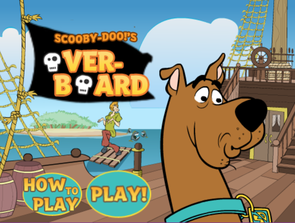 Help Scooby-Doo find Shaggy across the plank of a haunted pirate ship. Try to dodge cannonballs, pirates and other obstacles as you jump across the rafts to reunite with your best buddy.
SCOOBY SLIDE 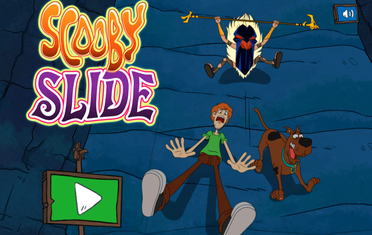 Try to escape from a fearsome Chicken Warrior by getting as far as you can down a seemingly-never ending slide. Collect Scooby Snacks and avoid obstacles along the way!
SPOOKED OUT SCOOBY 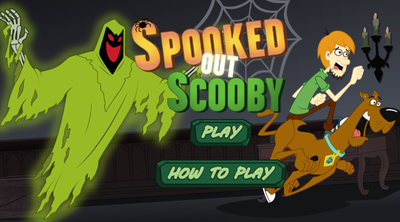 Scooby and Shaggy are being chased by a green ghost in a spooky castle. Help them avoid the obstacles and collect Scooby Snacks, while making sure you don't get caught by the ghoul!
BE COOL, SCOOBY-DOO: MYSTERY PUZZLE 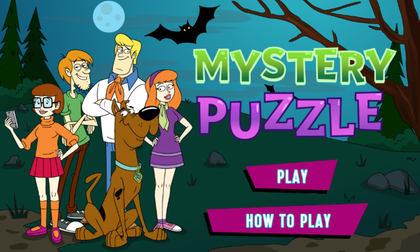 Put together the scene from the Be Cool, Scooby-Doo! show in this challenging puzzle game. Try to do so in as little time as possible and beat the time limit!
SPOOKY SNACK SEARCH 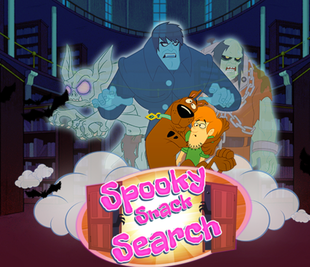 Complete 15 challenging levels by collecting all the keys and snacks, while also dodging obstacles and villains in this haunted mansion adventure game.
BE COOL SCOOBY-DOO MYSTERY CHASE 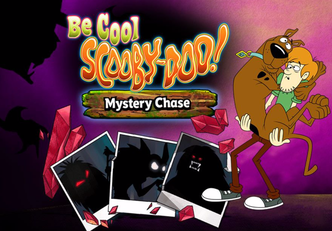 Run away from 9 different Be Cool, Scooby-Doo! monsters in the prison, museum, and caves, while playing as any member of the gang!